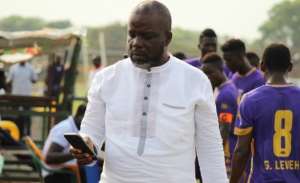 The owner of Tema Youth, Winfred Osei Palma has confirmed his intentions to contest the 2019 Ghana Football Association presidency.

The renowned football administrator was part of Kwesi Nyantakyi’s led administration that led Ghana football to the ditch.

Ghana football is currently going through a reformation following the premiering of the ‘Number 12’ video by ace investigative journalist Anas Aremyaw Anas.

However, the former Executive Committee Member of the then Ghana FA becomes the third to officially show interest in the vacant post after former FA vice George Afriyie and Phar Rangers CEO Nana Yaw Amponsah all declared their willingness to run for the seat.

“I can confirm to you that Osei Parma will be contesting the FA Presidency,” Protocol officer for Tema Youth Eric Collins Odoom told Ghanasportsonline.com.

“After taking into certain things into consideration, he decided to contest for the seat.

The Ghana Football Association top seat became vacant after Kwesi Nyantakyi was forced to step down after being caught in a scandal.