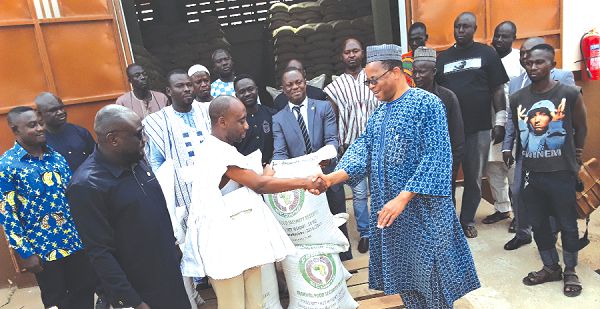 Mr Sekou Sangare (right) presenting a bag of the cereals to Dr Sagre Bambangi, while Alhaji Hanan Abdul-Wahab (left), the CEO of NAFCO and some officials from ECOWAS and NAFCO look on.

The Economic Community of West African States (ECOWAS) has handed over more than 2,750 tonnes of cereals to the Ghana government to boost its school feeding programme under the Free Senior High School (SHS) policy.

The cereals comprise 1,000 tonnes of maize, 750 tonnes of white rice, 500 tonnes of millet and 500 tonnes of sorghum, which have been stored in the warehouses of the National Food Buffer Stock Company (NAFCO) in Tamale and Yendi in the Northern Region.

The offer became necessary following a request by the government of Ghana to ECOWAS for the cereals under an agreement that Ghana restocks the warehouses by March 2019.

The cereals were stored in the two warehouses in 2017 under the ECOWAS Regional Food Security Reserves to be used in the event of disasters in the sub-region.

The Regional Food Security Reserves was created on February 2013 in Yamoussoukro, Cote d’Ivoire by ECOWAS Heads of State and Government during their 42nd Ordinary Summit aimed at complementing the efforts of the member states to provide rapid and diversified food and nutrition assistance.

At a ceremony at the NAFCO warehouse in Tamale to officially hand over the consignment to the government of Ghana, the ECOWAS Commissioner for Agriculture, Environment and Water Resources, Mr Sekou Sangare, explained that the handover was the concrete response of the ECOWAS Commission to the request of the government of Ghana that had committed to replenish grain for grain, the 2,750 tonnes of cereals by March 2019.

“Like the cereal stocks of 6,528 tonnes given to Niger and 4,303 tonnes to Burkina Faso last August, the 2,750 tonnes of cereals to Ghana that constitute the object of our handover ceremony yesterday have all been purchased from small producers of our region,” he explained.

Mr Sangare was hopeful that while offering markets and business opportunities, the Regional Food Security Reserves would allow member countries to quickly express their solidarity to countries whose populations were in dire need of food and nutrition following drought, natural disasters such as floods, landslides among others.

The Deputy Minister of Food and Agriculture in charge of Annual Crops, Dr Sagre Bambangi, stated that with the country’s Planting for Food and Jobs policy, the government would have no problem replacing the stock.

He announced that the government was expanding its warehouse drive by 80,000, assuring that the collaboration entered into between the government and ECOWAS would be strengthened.

Anas Aremeyaw Anas narrates how he got into investigative journalism

What just happened? Experts break it down